Dynamics from the beginning

Kemmler + Riehle was founded in 1972 by Werner Riehle and Kurt Kemmler in a small neighboring village of Reutlingen. Soon, the two-man company developed into a small firm that increasingly focused on the area of mechanical engineering. The development of the Modular Mounting System in cooperation with the Fraunhofer Institute in Stuttgart provided the basis for expandable concepts in production equipment.

Very quickly the product range and the customer base expanded, so that 1988 a new company building at the current location in the “Industrie- gebiet West” in Reutlingen was realized.

In order to meet the further rapid growth, in 1999 an additional production, office and warehouse building was built on a total area of around 8.400 m². Thereby it´s ensured that the different areas of production, design and management work together effectively.

Meanwhile 85 employees, including 17 engineers and designers contribute to the success of Kemmler + Riehle. 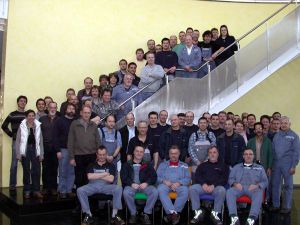